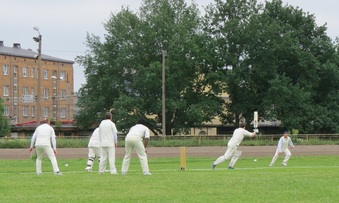 It was an early morning for those of us coming from Finland. As so often is the case, those with the shortest trip arrive last, and crossing the Gulf of Finland to get from Helsinki to Estonia's capital Tallinn is done in no time. You can easily do Tallinn as a day trip. (In fact, I once went to the cinema in Tallinn, because the film I wanted to see wasn't on in Helsinki.) This time, however, we weren't making a day trip. We were making history.

It was the first ever overseas tour of my local cricket club, Ekenäs CC. Our hosts in Tallinn were a local social team, the Old Barbarians. And the whole tour was historical because a team of strangers were coming from England as well. Because the English contingent didn't only consist of strangers to us, they didn't even know each other.

Though by the time we arrived at the Tallinn Hipodroom on the Saturday morning, they had met for the first time – some at various airports around Britain, others in Tallinn the evening before, with Joe joining up only that morning, on account of train trouble, a missed flight and a night spent in Helsinki instead of Tallinn... Strangely though, they had already gelled into a Team, complete with a 'Barmy Army' of their own, as Joanne and Olga had come along to cheer them on rather than play the game.

The team's name had been determined beforehand, by Robin of the Old Barbs in one of the many e-mails exchanged in the preceding months. And it was only right that he should be the one to name the OBOccasionals, as the whole tour was his brain-child. 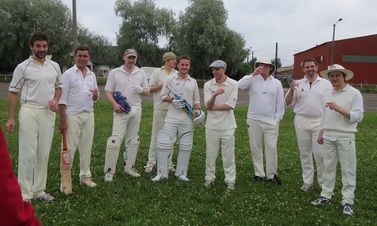 OBOccasionals preparing for their first game.
It had all begun with a bit of friendly banter on the Guardian's OBO (or over-by-over reports, the newspaper’s live blogs of England's games) during the England v India Test series in December. I had written in to the Guardian on December 6th during the Third Test to point out that Steven Finn was marking Finland's Independence Day: "Of course, his getting MS Dhoni's wicket won't even register with most of my (or his?) fellow Finns, but in the extremely tiny world of Finns for Finn, I find it eminently suitable..."

Looking back, it seems only right that the seeds to this, the first ever OBOccasionals tour, were sown in India, so to speak, as it is because of a trip to India that I – unlike the vast majority of my countrymen – am an avid cricket fan. It was when I went on holiday to Goa in December 2007 that I finally learned that all other things are insignificant compared to an India v Pakistan Test series. Out of curiosity I read the local papers and found they seemed to consist entirely of death notices and cricket reports. I decided to pursue the latter rather than the former, so I also watched the summary of the day's play on TV in the evenings. Neither offered me any insight into the game. In fact, I didn't understand anything at all.

I had read English at University. I worked as a translator. And I still had no idea what was going on in a Test match. I became frustrated, then annoyed. "I'll learn the terminology, then I can forget all about it", I decided.

It took me more than a year of reading the cricket reports of various British papers. I started following the over-by-over reports on the Guardian’s site, and found that the pace of the game opened up for me there. Wikipedia explained words like 'crease' and ‘duck', and the various manners you could be ‘out’ according to the Laws of the game. And then, during England's tour of West Indies in early 2009, I suddenly understood cricket. 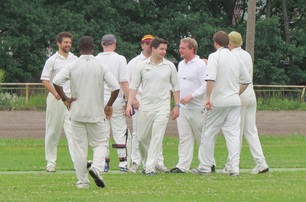 A wicket has fallen and the OBOccasionals celebrate.
“Brilliant. It’s utterly brilliant. It’s like chess, but with real people”, I remember thinking. “And you have to factor in the weather and how the ball behaves in different countries, and the fact that grounds are not uniform in size…” It hadn’t been love at first sight, but I was in love now.

Which is why I found myself on a ferry to Tallinn one summer morning more than four years later, going to meet people I knew nothing of, except that they, too, had a love of the game of cricket. Most of them had grown up with cricket, but not all. Olga was from Poland and had married cricket when she married Olly. Some had played at school, many still played with friends in their local Sunday leagues. James only took up cricket in 2009 and boasted averaging “a handy 1 with the bat” this year, but it wasn’t the skills (or lack of them) that mattered, it was the fact that cricket brought us together.

So many times over that weekend I heard people say – to me or to each other – that it was amazing how natural it all felt, how well we all got along. Yes, cricket, and yes, the Guardian – though in all honesty I don’t know that all of the people I had convinced to come with me from Ekenäs CC even read the Guardian much. But the fact is, I’ve only ever met nice people through cricket.

Ekenäs CC is one of currently 23 cricket clubs in Finland and plays in the Finnish Cricket Association's X Division, the lowest T20 competition going in the country, as well as in the Indoor League in the winters. The club was founded a couple of years ago by a group of people who had roots in Finland as well as in some cricket-playing country. Our captain Nick grew up in Yorkshire and had played there as a lad, but he had since made his home in Finland, his mother's native country. Alan too is from Yorkshire, while Andy, another founding member, spent a number of formative years in South Africa and learnt his cricket there, but has lived Finland since his teens. Rabin is from Nepal and, having lived in Finland for many years, was happy to reconnect with a game he had played as a kid. German-born Knut had not played cricket before, but joined the club and learnt the game, simply because it seemed good fun. Perhaps there's not that much else to do in Ekenäs… 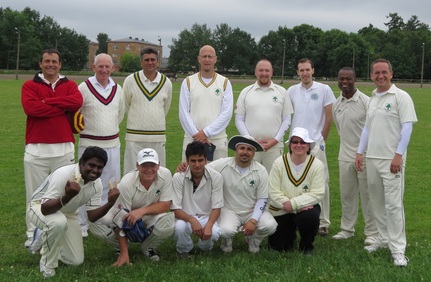 A proud moment for me: the Sara Torvalds Invitational XI.
In Tallinn, however, there was definitely cricket to be played. We had three teams of sorts: the OBOccasionals from England, the Old Barbarians from all over the world, including some native Estonian players (I never asked how many nations were represented, more's the pity, but they were a cut above us, that is certain), and the Sara Torvalds Invitational XI – so named since we had to borrow some players from the other teams, as not all of Ekenäs CC had been able to join us in Tallinn. (Just as well, since it raised the skill level considerably.) And I must say it was one of the proudest moments of my life to cheer a team, even if a temporary one, that carried my name.

Why my name? Simply because of that e-mail to the Guardian about Steven Finn getting MS Dhoni out to end India’s first innings. That had, in a very roundabout way, lead us all to this beautiful cricket ground in Tallinn, as Robin had responded with a tongue-in-cheek challenge: “I'm not celebrating Finn taking a wicket because I'm sick of Finns taking our wickets when we play them. Ms Torvalds is welcome to bring her team across the water and join their number if she'd like. A real OBO international match-up.” I gladly – and unthinkingly – accepted the challenge on behalf of Ekenäs CC (of which I am a non-playing member), upon which Robin extended the invitation to the entire OBO community. I really didn't expect people to fly to Estonia from England for a couple of games of cricket, and nor did he, but they did come. And unlike Ekenäs CC, the OBOccasionals actually managed to field a full XI in Tallinn.

The Sara Torvalds Invitational XI first played the OBOccasionals and won, amazingly, and a bit unfairly, as the OBOccasionals gave everybody two overs to bowl, whereas the STI XI actually tried to win and had a couple of very good ringers. (Bless you for hitting those sixes in the final over, Tim! If you play for the STI XI again, I promise you can bat up the order!)

Here’s to meeting again, hopefully next year in Ekenäs!
This text was first published on Wisden India: http://www.wisdenindia.com/cricket-article/tangle-tallinn/71652